16. "There are no moral phenomena at all, but only a moral interpretation of phenomena" - Nietzsche OR: "I used to do drugs. I still do, but I used to, too." - Mitch Hedberg 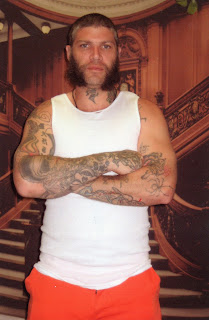 I think I became addicted to drugs by accident.  I'm not sure anymore it's been so long.  I was 14 or 15 by the time I was on my way.  The drug use of my youth was sloppy at best and very unrefined.  There was the usual pot smoking and beer drinking, you dig, the kid shit.  I wasn't even clear on what addiction was.  Well, addiction at it's most polished, anyhow.

Now I want you to know right off the bat that this isn't going to be some "drugs are bad for you and now i'm righteous, motherfucker."  That's not what this is, but I feel I probably need to foreshadow some to get to the place I'm headed.  I warn you, though, I'm going to wherever the opposite of a beautiful tree-covered lane opening onto a wide, beautiful field goes.  The polar fucking opposite.

Like I said, I wasn't sure what an addiction really was, but i knew in my soul that drug use at it's base was at least romantic.  I really thought this and I still kinda do.  I've always been drawn to filth, to degeneracy.  I've always thought that this, people at their most mad, was the place where we do our purest living.

I felt the most comfortable in basements full of speed freaks and hookers.  I loved to get high and watch their movements, how they hustled and glided and interacted with one another.  It was like watching hyenas and lions fight over a zebra carcass.  I was mesmerized when it seemed like they were biting at each other's faces like dogs who try to eat out of the same bowl.  I felt at peace in the middle of all that chaos, and I admit that sometimes I can't get comfortable still.  I am rarely comfortable.

When I was 15 I started to take morphine.  I was in it's liquid form and very strong.  Some friends of my mother were prescribed the drug and we took the shit out of it.  I was a warmth that I had been looking desperately for at the time.  I didn't feel constantly nervous.  My muscles weren't constantly tense.  I didn't hate, and lash, and punch.  I felt at peace and all the filth that came with it, well that was a bonus.  The liquid became the pills and there was so much of it that it never occurred to us to stop taking it. And when we did it didn't occur to us that those flu-like symptoms were withdrawal.

Withdrawal.  Motherfucking withdrawal.  I wish I could explain my love-hate relationship with this thing, this creeping, holding thing.  I really don't want to get poetic about it, which is what I seem to automatically lean toward.  It's the unexplainable-ness of the thing.  I guess in one way it must be like giving birth.  It hurts like a bitch but once it's done you forget about it enough to do what caused it again?  That's entirely too simple, but fuck, isn't that the thing?  There's no big payoff in the after.  There's nothing and you're  never really better.  Not really.  I think it's a reminder of how tough you really are.  If I'm going to get right at it, dig righ into the sore, that's the truth of it to me.

Withdrawal is the love of the thing.  It lets you know it still hurts, that everything's still real, and pain is a slinking, spidery beast that wants to scream and beat it's chest at you.  Your job is to not flinch too much.  That might make it charge.  You lay on a jailhouse floor or sweat through a mattress and curse gods and children.  You curse every breath and movement and drip of sweat that streams like an electric eel sliding down your torso.  Shower water is like small, hot needles worming their way to your core like an Albert Fish X-ray.  The same if you try to drink.  You can't move but you have to keep moving.  Have to keep squirming.  You can't talk much but you don't need to, the conversations in your head are the arguments of the gods.  A great tug-of-war, the push-pull of guilt vs. salvation.  Salvation never wins out.  It never has in thousands of years.  We will continue to indulge our every pleasure.

Your face doesn't feel attached.  It feels almost too loose on your skull.  Any pressure to it or any part of your body is like a small, steady current.  You can't hardly touch your dick - pissing is torture and if you do luck into some minutes of drool-laden sleep, you're sure to wake up having cum all over yourself.  Only this is no solace, no ray of light in the storm.  It's cold and sad and it's like a wet dishrag left in a corner with all the small bits of food stuck in it to stink.  It's the whore shivering in the couch.  There's no end to it.  You tell yourself only four days.  That's the worst of it, four days.  You;re only deep into day one now.  Besides that, you think about your drug.  You pine and shiver for it.  You don't tell yourself you'll never do this again.  You tell yourself this is payment, this is a sort of toll.  Nothing is free.  The greatest pleasures to your mind and body must be paid for.  Ain't shit free.

The thing needs to be paid, it will be paid.  You never end up owing.  You see this in the movements of junkies and whores.  The imperceptible jerks of the eye to look at and focus on the tab.

Once you've completed this you can get high again.  Withdrawal happens for a couple of reasons.  Either you can't pay for your dope or you're trying (or forced) to quit.  Both are inevitable.  It will happen and the withdrawal is never any easier.  It's only when the sickness outweighs THE SICKNESS can you contemplate stopping.  You'll think about it and talk about it and try to convince your loved ones that you have a plan.  It's all smoke.

I'm having a hard time here.  This is really so hard to explain, to get right at.  I want to tell you how it really is, put the rock right up against the roll, but at what cost?  I understand now why everything I've ever read by an ex-addict who is now sober sounded like utter bullshit.  It was.  So to avoid lying I'm going to sort of move on to where I'm trying to go.  I'm sober now.  I have to stay that way.  I could let the spider eat me, I just can't throw certain people into the web.  I can't, so I have to let that be my drive.  I have to keep telling myself that, even now, because I still want to go back.  I can't though.  I need to keep my children out of the web.

When I was 18 or so, I moved to Detroit to pursue my career as a drug addict.  I was living off of State fair on the East side because it was close to Tony.  I went to school with her and her mom died of M.S. leaving her a two-family flat in Ferndale.  Tony had been getting high for as long as me but she was smarter.  She had looks as well and started selling ass.  Her operation was this: get seven girls of good quality, move them into the house and charge a percentage of the ass that they sell in exchange for room and board.

These were top-class girls, not the wild-haired, Garfield shirt wearing, two different shoes on, type street girl.  I started going to her place to get my dope.  Tony, who was familiar with my propensity for violence, asked if I wanted a job.  I would drive the girls to their dates and wait outside with a burner until they were finished and bring them home safe and sound.  I got $20 a trip.  This was a mostly 24/7 gig, so I made excellent money, sometimes clearing $500 or more in a 24-hour period.  roughly $400 went to dope.  This, my friend, was where it was at, as far as I was concerned.  Tony was a fucking hustler.  She was a sexy pit of despair sitting on a toilet seat, blood running down to and dripping off of her knuckles with a belt tied around her arm.

She was slicker than owl shit.  She would take a trick behind the water heater downstairs in the basement.  She would kneel down in front of him and as she started to unzip his pants she'd start to cry, I mean really turn on the water works.  She'd claim this was her first time, that she didn't know if she could do it.  Half the time the guy would run off embarrassed leaving her with the money.  The other half she'd just get slapped and have to work.  Either way, she cried, but 50% is good odds.  Workable odds.

These girls got to be like sisters.  I know it sounds like too much, but I got protective.  I never slept with any of the girls.  For me it wasn't about that.  It's like working at McDonald's and never wanting to see a french fry again.  Well, almost.  It was an inescapable circle of dirty, lusting madness.  The men who came around amazed me.  Their demeanor captivated me.  These men were either infants again or large, imposing, hurtful fathers.  Some had wicked smiles that never left their faces.  I kept a close eye on these ones.  Some had almost no expression at all and they were the most worrisome.  I filled my days and nights trying to keep these girls safe and I never succeeded.

I walked in on a guy prodding Tony all over while she was passed out.  She was spread eagle on the bed and this guy was kneeling in between her legs just poking and prodding like some filthy doctor.  It seemed like a degeneracy I'd never encountered.  It stirred emotions I had stopped having.  It seemed like an affront, but I didn't know to what.  My first reaction was to shoot him, then I moved to pistol whip him, but that would have led me to shooting him.  Instead I just got to beating him.  I beat the man until it woke Tony and she freaked out on me.  By this time the other girls were in the doorway, but they looked restless, they just looked tired.  This made me sad, that and Tony yelling at me for beating this guy because, as she put it, he was an honest man, that he would have paid.  I looked at him where he laid in between the wall and the bed and he was fucking nodding in agreement like a beat child.  I was furious.  I was enraged.  I was sad and sick and shivery.  If she got paid that means that i would have gotten paid.  I stopped working there not long after.  It all went to shit.  i left those girls to be poked and prodded and I just hope that they were honest men.