14. You Can Label Just About Any Horror Under "organic" or "for prisoner consumption" And Get A Pass From The FDA.

The food here S-U-C-K-S.  It's a sad state of affairs.  I'm conflicted on this, though, because  - I'm in prison.  What should I expect?  I saw a show on National Geographic about a prison in Peru where armed guards stood next to a putrid pot of porridge and the inmates literally fight to get half of a scoop.  (As an aside, Putrid Pot of Porridge could be a sweet band name.  Any of you feel free to use it.  My personal favorite for a band name is THE UNDERWATER HANDJOBS.  You may not use that one.)  The prisoners there are on another level.  Here we have Block Reps who are convicts and are fucking elected to discuss with the warden our rights, such as being able to have our shirts un-tucked (which we now can as per policy) and bringing to their attention that the suckiest movie, REAL STEEL, has been playing on a loop for two weeks.  Just when I get to thinking this place is the worst, some third-world country has to fuck it up for me.  Since I don't live in a third-world country, I'm going to continue bitching.  It's my fucking right.

If you're not a vegetarian, you've probably never had to suffer soy.  If your girlfriend or wife is a vegetarian (which makes you a vegetarian) you most likely have.  It is next to impossible to make soy something it's not.  What soy is NOT is good.  As in - soy is not good.  Fuck.  You get it.  It tastes like earthy nothing and shame. You know, it tastes like how I'd imagine the soil in the far corner under high school bleachers would taste.  The corner with the condom wrappers, a ripped letterman sweater, two beer cans (one Black Label, one Milwaukee's Beast), and a mildewy social sciences text book.  If you're thinking - "Eww.", you've hit the nail on the head.  That's what it is - EWW.  Now, mix this with cabbage, random veggies, and a side of beans every meal and you have your basic dish.  Sometimes we have a meal of fake poultry chunks and that's a delight.  Same shit, minus the soy.  If it's a really good day, we get some breaded bread with a vague fish or chicken flavor.  For sides it's always either salad, carrot sticks, or cole slaw.  There's dessert of cake or a fruit which is usually a bait-pile apple.

I want to interject again.  I'm listening to Miles Davis' Kind of Blue album and I think it might possibly be one of the best things recorded.  Really.  It's being piped into my head as we speak, or read, or whatever.  It was left to me by another convict leaving, which is it's own subject that I'll be writing about.  I remember reading something about it being one of Duane Allman's favorite albums.  He said Miles and Coltrane were about all he listened to for a couple of years.  I believe it.  He's the rare "rock" guitarist who could one-chord solo with such melody.  Anyways, based on that I jumped at the chance to grab the album.  I also got Tom Waits' Heart Attack and Vine, one of my favorite Waits albums. these two albums have been keeping me company.  Also, if you're curious, they are cassette tapes.  While they are old and somewhat nostalgic, the sound quality blows.  If you happen to be rocking the Sony Walkman cassette player to be ironically cool, we all know you're a wet spot and could give a shit about hearing the subtleties in the rhythm guitar on that Smashmouth album you're rocking.  Dick.  In conclusion - purchase Miles Davis' Kind of Blue and immediately rock the B side.

Now to counteract that, we have a prison store that you can order from every other week.  It has your basic candy and chips but it does have some decent survival food.  Tuna is one.  Mackerel is another.  There's assorted freeze-dried beans and, of course, Ramen noodles.

You know what?  I'm going to save my wrist and send a copy of the store list for your viewing pleasure.  Notice the inflated prices. 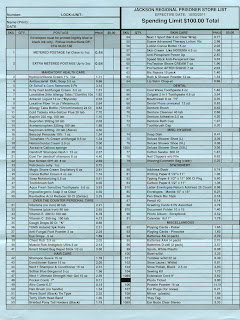 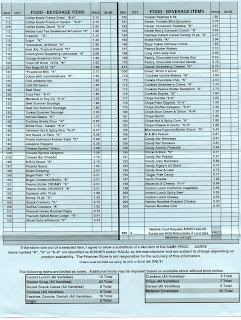 In theory, this is to go to our "inmate fund" which pays to have REAL STEEL play on loop.  If I haven't mentioned it, it's a REAL TURD.  Just a couple of months ago, the movie The Green Lantern was stuck on the menu screen for a week.  Another suck movie.  February was a joy, too.  It was a random documentary from the 70's on Apartheid in South Africa.  WTF.  At least hit us with The Color Purple or something.  Isn't that the one with the retarded pregnant chick?  the Oprah loses her shit when she sees the white dude on the carriage.  He knocked her up?  I dunno.  So anyways, the way you can receive this store is to have some solid people on the outside.  (Alison keeps money in my account which is something she's always done while I've been locked up.  Thanks, Al.)  You can also buy store from your state draw, which is the paycheck you receive once a month if you've got a job.  Now this is kind of a trick.  The most you make is $3 a day.  that's what I make.  I work five days a week, so it comes out to about 60 bucks a month.  The trick is if you owe any court fines, they take half.  So I get 30 bucks a month. RE-TARD-ED.  If I owed restitution as well, they would take it all.  So if you don't have somebody out there putting a few bucks in your account to supplement this, you're fucked.  You basically need to resort to finding a hustle to get by.  This could be anything from making greeting cards, to gambling, to fucking.  There is no end to hustles.  It's just one more stress to stack onto all of the others.  But like I said in the beginning, this place is no Peruvian prison.  Guys in there have M-F'ing hand grenades!