11. Abeunt Studia In Mores OR Don't Let A Hustle Turn Into A Habit

There are men in here who fuck other men. Some do it because it's what they did on the outside, kissing dudes was their thing. It's hardest here for those men. They're the object of torment and ridicule. Men hate men who fuck other men. It's not the fucking. Men don't particularly care what they fuck. It's how immasculating the act is. Plus, it's gross. I could give a fuck. Someone once said, “You shouldn't care what one is doing with his dick, unless you're sitting on his lap.” He's right. It does bring me to the idea of absolute morality or, rather, the lack of an absolute morality. I believe that anything considered immoral right now can quickly become moral.

Moral: 1. of or relating to the principles of right and wrong 2. Conforming to a standard of right behavior; also: capable of right and wrong action 3. Probable but not proved 4. Perceptual or psychological rather than tangible or practical in nature or effect.

I don't believe morality has so much to do with right and wrong as it does with what best benefits a society. Deeming what's moral collectively seems to keep the train on the track.

Don't murder folks. Obvious. The Society does not feel comfortable if someone's just merc-ing people all willy-nilly. Of course, it is morally acceptable to murderize someone from another country.

Don't steal shit. Pretty good one. This also tends to piss off the collective. You worked hard for something you're not just going to let some degenerate take it. You'll kill the fucker first. You are more than welcomed to do this in Texas and Arizona.

Let's see I guess we can include not fucking things that don's belong to you. Adultery. You married it, it's yours. If someone else fucks it, it will be considered stealing and grounds for murderizing. Happens every day.

And, of course, homosexuality. I'm not sure exactly how this negatively effects society, but I do know God is not keen on you putting the innies with other innies, so that gets a nod. Although I never did get why not. Nobody can deny that two hot chicks getting it on is hot. NOBODY. I'm pretty sure the bible is strictly prohibitive of dudes fucking but I didn't see anything about chicks. God's a freak. I can understand it, though. The woman's form is beautiful, there is not one redeeming feature in a dick. Not one. It's an awkward bit of flesh that seems almost like an afterthought. Like a vestigial tail that you're always showing off and certainly nobody asked you to wiggle.

So, these things and a host of others are considered immoral. Now I say that these things can all become moral or at least acceptable in a very short time.

If every woman on this planet were to kick off all at once, dudes would be fucking dudes within the week. Don't believe me? It happens just like that in the microcosm of prison. There's no women here, and a lot of men will resort to fucking another dude surprisingly quick. Now, not every dude is doing it, some don't have enough time. Some just aren't into dudes – which I understand – but a lot of them are. They like to justify it and rationalize it. You are not considered a fag if you're the one doing the fucking. Isn't that awesome?! If you're not the one being put into the position of the feminine it's okay. If this is so then – who is the feminine? There just isn't a rash of homosexual criminals and even if there were, who's going to say that he's a bottom anyhow? Somebody's got to fucking do this so there are some men so inscrutable that for a price they will be the chick. Some are pressed into it - usually a young man with gentle features who can't fight back. Some, most, will do it for a price. They claim to not be gay. Maybe they're not. Who am I to say? But once you start dressing like a woman and prancing around, you might be fooling yourself some.

Don't get me wrong. I know you've got this image of a guy all dolled up and ready for a night on the town but don't get it mixed up. I have seen a sissy knock a motherfucker out. Knock him out and then take his ass just to hurt his feelings. Sissies aren't about no games. They're paid handsomely and are not at all fucked with, generally. The guys in here who, at the same table, will talk shit about a fag will also have good things to say about a sissy – unless, well, you know.

And even if you take the sexuality out of it, men in here form close relationships akin to marriage. It's how I found my Jeffery. It's a close platonic relationship that becomes almost as burdensome as marriage.

It's imperative that you find someone you click with or it all gets too heavy. You have to have positive interaction with another human being or it all comes crumbling down. It can't be all stalking and warring. The constant pressure in here to stay alpha male is a considerable, though manageable, thing. Having that one other person to bitch about the other animals with can mean the difference between a good day or a stabbing. I am not joking. It gets to be almost surreal with all the posturing and cock-walking. I find myself fighting mad about twice a day on average.

I know I will not make this 16 months without fighting. I like to fight when I'm not in prison. I feel like this place lets me sharpen my claws. I would be in the hole already if it wasn't for the companionship I found with one guy. It's a guy I went to school with and had been friends with until he went to prison. He's just finishing a twelve year sentence. He's nervous and I'm nervous for him. You can probably tell that I feel uncomfortable writing this, but I said I'd do it. I don't feel any desire to see his penis, that's not what has me uncomfortable. 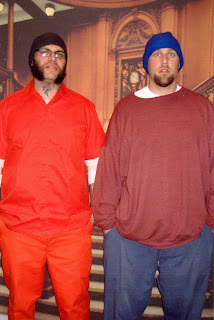 He's kept me out of two fist fights in the short time we've been here together. He's jumped right in between the two of us screaming, so close we were spitting on each others faces, and pulled me away. I see this man watch me and pace like a tiger at the zoo. When Davey leaves we'll probably fight. I'm ready for it. I want it. It wont prove anything. If I'm as good as I think I am, I won't get caught - unless he tells. That's a reality, but I don't think he will. It will be fast and brutal and bloody. It's much like the release cutters must feel.

There isn't going to be anyone to tell me this is a bad idea.