This is one of the numerous things I don't understand that I've overheard here.  I now know it pertains to making meth or some shit but it leads me into my ramble on jailhouse ingenuity.  That and I thought the sentence sounded beautiful, futuristic, deadly.  I like the way it sounds in my mouth, unlike, "if you mix ramen noodles, potato chips, and some random state ingredient, etc. it tastes vaguely like Taco Bell."  That, my friends is a lie.  a dirty, foul lie.

Convicts on the whole are terrific inventors and how can they not be with someone making up quotes like, "Necessity is mother of invention."  We really love to make the most out of nothing in here and you have no idea what you'e missing until you electrocute yourself making hot fucking water with a pair of fingernail clippers and an electric fan cord.  The funny thing is the state provides you with everything you need to make everything from a lighter to a passable version of a pussy.  You just have to figure out how to put the pieces together.

Take a simple AA battery (non-rechargeable).  How many things can you do with it besides using it to power ironically-retro CD Walkmans?  If you say "make meth" you're cheating.  We've already covered that above.  If you have a small amount of Brillo, or copper wire like you'd find in headphones, you've got a lighter for your three-dollar cigarette wrapped in toilet paper wrapper.  Hold one end of the wire on the negative terminal and the other to the side of the battery.  If your wire isn't too thick it should be scarring your thumb and forefinger right now.  Get that poorly-rolled smoke in there!  What do you do when that battery runs out of juice and you have to wait three weeks for a store order to come or worse, you don't even have money to order any?  Re-charge the fucker using the AC adapter you can buy on the yard for three bucks worth of noodles or soap.  I won't go into details how to do this in case some kid blows his face off.  If you really want to recharge non-rechargeable batteries the hard way, look it up.  You're already on the fucking internet.

Just so you don't think I'm an L7 I'll teach you how to make a stinger.  This is the electrocution device I mentioned earlier used to heat up water.  It's very simple and extremely effective.  All you need is a lamp cord and a set of fingernail clippers.  I'm going to try and explain this as accurately as I can but so you don't blow all the fuses in your garage impressing your buddies I'll include a diagram John can post if he wants. 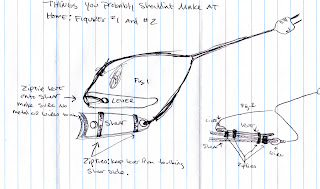 Okay, take your fingernail clippers apart.  If this takes you more than 30 seconds, punch yourself in the face and stick to Legos.  You wont need the metal post that hold the shear to the lever.  Now the lever has a hole the post went through and the shear should have a hole that you would normally use to string a keychain through, or your dick, or whatever you put through holes when you think no one is looking.  These holes will have a wire threaded through them and tightly wrapped so a good connection is made.

You should now have a lamp cord with the shear half of the clippers attached to one wire and the lever half to the other.  You now have to acquire four zip ties and put the halves together as close as possible without letting them touch.  The best way is to put two zip ties around the lever half to create a plastic barrier and then zip tie the lever half piggy back to the shear.  Please don't do this until you've looked at the diagram, at least don't plug it in until then.  If you do, take video and send it to John, I wanna see it.

Okay, the two halves shouldn't be touching.  Once you've established that, get a cup of water that you want to heat.  Put the clippers (now your stinger) into the water and plug her in.  You should hear it humming to heaven.  You should also see all the nickel plating come off.  Let it go for while and start over.  The plating is only going to come off once.  DO NOT STICK YOUR FINGER IN THE WATER TO SEE IF IT IS HOT.  DO NOT USE A METAL CUP.  It's ok to hold the outside of the cup if need be to check the temp, or you can simply unplug it and test the water.

Now you're ready to add you cheap instant coffee or cook a beef stick while some guy gives you a tattoo and Hep C.  Good job!  Make sure you hide it well and don't let other convicts know you have it.  If you get caught with your stinger it's a dangerous contraband ticket.  You might as well have made a noose or a shank.

You might ask yourself, "Why the fuck would someone risk being put in the hole or at the worst being flopped for hot water?"

The answer is just to feel fucking normal, human.  There's things that eat at you, gnaw at your self.  Sure, they sell you instant coffee, but you're only out of your cell a couple hours to get lukewarm shower water to drink it.  It's the touchable allowance of a thing but when you try to grab it, it floats away like that buggy fucking thing you always see in your peripheral vision.  So you rebel, which in most cases is just saying, "I can do it my own fucking self."  It makes you feel useful and in control.  It's also nice to have a hot fucking cup of coffee.  You do it just cause you can.  Sometimes a cigar is just a cigar.

I don't need to get further into the shit you can make in prison, I'm sure you get the idea.  Suffice it to say, I've seen some amazing shit.  Truly fucking mind blowing in a Nikola Tesla sort of insane genius way.  I've also seen someone test how hot the water is with the stinger plugged in so I guess it evens out.

This entry was supposed to be about hustling which was brought upon by my watching my favorite movie The Hustler with Paul Newman, Jackie Gleason, and the pretty lady Piper.  It occurred to me when I sat to write it that the movie had nothing to do with hustling.

To me, Paul Newman has always been the coolest motherfucker on the planet.  Fuck Steve McQueen, fuck James Dean.  Paul Newman is coooooool.  If you don't believe me, watch The Hustler, the scene where Eddie and Sarah are in the Parisian restaurant.  Right before Eddie tells Sarah he's going to Louisville, Sarah orders a sherry ("something very old and very dry").  Watch the movement Eddie makes with his hand in front of his face when it cuts to him.  Now try to mimic that hand wave.  See?  Cool.  I love the madness between this couple, locked in the one room apartment.  Eddie believes he's a loser and Sarah is a crippled drunk trying to write a book and going to college on Tuesdays and Thursdays.  Eddie asks what she does the rest of the days.  She responds: "drink."

The madness is Bukowskiesque and her being lame isn't a metaphor for anything.  Things just are and they aren't.  Every time I watch that movie I totally forget Gleason's in it.  Paul Newman's too cool.  Watch Cool Hand Luke.  Watch Butch Cassidy and the Sundance Kid.  Watch any Newman flick.

If you want Gleason, watch him as Buford T. Justice, and when he gets home remind him to, "smack your momma in the mouf."

None of this has to do with the post, I'm just pushing my own agenda now.  WATCH MORE PAUL NEWMAN MOVIES.  John might even omit this last part.  He'd probably be right.