Hey, Guys.  Sorry for the wait (if you weren't waiting, sorry for the presumption. I had messed up my store order and had to wait a couple of weeks before I got stamps.  I have them now and I also have a fan.  Yup, you heard right, mother truckers.  A fan.  I got my first piece of unsolicited fan mail a couple of weeks ago from a gentleman named Chris.

Chris just turned 50 and rides an old VT1100 and says prison rape and Hep C aren't subjects that he finds funny.  I think that we can all agree on that, Chris.  He also says that he has a "soft spot for fuckups and that goes double for skeevy types with a righteous vocabulary."  So, Chris, your redemptive qualities certainly outweigh any lack of humor you may or may not possess concerning rape.  I thank you for you letter and I'm going to include some of the questions you wrote. 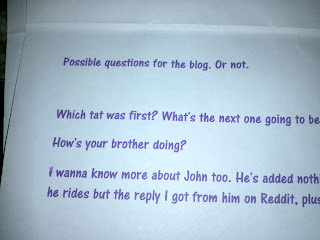 #1. Which tat was first?  What's the next one going to be?  Best story connected to one of 'em?

Okay, Chris, this is three questions but that ok because they seem to be grouped in the same category and therefore show promise.  The first tattoo that I got was a spider that I let a friend tattoo on my knee after I had gotten out of a foster home.  I was 14 and my best friend, Derrek, had just gotten out of a boys home armed with this new talent.  I thought I was bad-fucking-ass.  I thought that as soon as the chicks saw it I would be building a fucking castle out of poon.  The most I ever got was a, "What is that on your leg?  Ewww."  14-year old girls blow.  Now that I think about it, 14-year old girls molded my opinion of women forever.

My next tattoo will probably be another My Little Pony.  I am getting a chest plate and neck crest that consists of nothing but My Little Ponies.  There's gonna be so much pastel and glitter tattooed you'd think I murdered Easter.  I guess this sorta leads in to the last question in your series although it's pretty subjective as to it being the "best" but I'm getting them solely to destroy the pride and emasculate future opponents in a fist fight.

#2  How is your brother doing?

Ummm, I don't know.  Pretty good, I guess.  He usually does.  I mean I don't think he's sucking dick for bus fare or anything.

#3.  I wanna know more about John, too.  He's added nothing at all about himself on the blog page.  You suggest he rides but the reply I got from him on Reddit, plus the cool domain name from your blog, paint a more respectable picture.  More's the pity.

Okay, first we have to dissect and take this one piece at a time.  You say "you suggest he rides, but the reply I got from him on Reddit, plus the cool domain name for your blog paint a more respectable picture."  I can't say exactly what he wrote when he responded to you, but I can safely assume that it was indeed respectful.  John is an overtly respectful person, so much so as to be delightfully soul-crushing in his dialog with people.  They never see it coming and this is in direct relation to his intelligence.  On the other hand, it's probably safe to assume it's not because he rides.  If my memory serves, John also used  to ride an old 1100.  That fucking thing was like one of those bulls you see on the Wrangler Bull Riding Tour - a big, fearsome beast ready to kill you any time you fall off it's back, which I'm sure it was trying to do.  He held on though and I think Steve got it next and I then raped the clutch cable for my bike so I could ride on my bachelor party night.  Please excuse the rape joke, Chris.  It wasn't on purpose.

As far as the first part of your question, I think you're absolutely right.  I think John should contribut to this blog or at least indulge your request.  John is a first-class writer and is full of razor-sharp wit.  I sincerely hope this provokes John into adding some posts of his own.

I didn't meet my dad until I was 18.  There's an incredibly long and weird story that goes along with this timeframe.  He flew me down to visit him in NC where he lives and I pulled a "Bob" for lack of a better term and also to maybe get a chuckle out of him.  I'll relate that at another time.  I am told by other people that I am exactly like him in personality and temperament, also we have the same sense of humor.  He is now an alcohol counselor of sorts and still lives in NC with my sister and step mother.

We are indeed of Scottish and Irish lineage.  I may include at some point a family account, or excerpt of it anyway, from a letter my "Da" sent me mapping some of it out.  I'll need to get permission, of course.

#5.  I saw no mention of your mom - is she still walking the Earth?

Yup.  She has three cats. 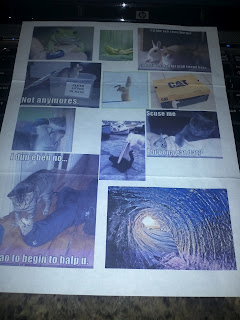 #6.  Had any jobs (on the outside)(other than dealing) that you really liked?

When I first read this question, or misread it anyhow, I thought it said "had any handjobs (on the outside) . . ." and freaked out a little.  I then saw the page of lolcats you sent with the letter and thought, that can't be right, and lo and behold I had indeed misread it.

Nobody likes jobs, my friend, that's why they have to pay you to do it.  Coincidentally, it's also why school's free.

#7.  Is there any particular chow item worth eating or worth looking forward to?

#8.  Did you ever "own" nine pair of underwear at one time on the outside?  I don't think that I ever have, but I'm not that into clothes, anyway.

This is by far my favorite question, Chris.  BY FAR.  I'm not sure why you put "own" in quotations, though.  Are you inferring that I probably borrowed them?  Maybe it's a typo but Chris, I hope it isn't.  I can tell you that no, I have never "owned" 9 pair of underwear but I can tell you that it's safe to say that I've probably worn one pair for nine days.  I'm not all that into clothes, either.

#9  Which song lyric has turned out to be truer, or more applicable to your life, than you previously expected?

"She said 'always remember never to trust me...'  She said that the first night that she met me.  She said, "There's gonna come a time when I'm gonna have to go with whoever's gonna get me the highest."  Hornets! Hornets! by The Hold Steady from the album Separation Sunday.

#10.  Any ghosts or paranormal activity in that place to report?

Okay, you just got a little weird on me, Chris.  Ghosts?  I don't believe in ghosts, but some people do and who am I to stomp on that?  This prison isn't very old and from what I can gather, people most associate ghosts with old places.  Maybe for the mystery of it.  Who knows.  I do hear chains rattling from time to time.

Certainly, Go Tigers.  I believe that anything that's more likely to eat you before you can shoot it should be commended.

Thanks for the letter, Chris.  I really did enjoy it.  People like you are the exact people  I believe make it easy and restful to live.  Jack K. likened you to Roman candles.  As my friend, Chryssa, would say, 'Stay same.'

I am going to include the page of LOLcats you included for the enjoyment of the others.  I hope you don't mind.